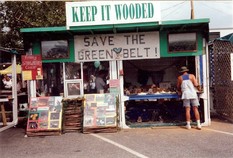 How the Last of the Green Belt Was Saved:

A History of the Committee to Save the Green Belt

Our city’s name—Greenbelt—comes from the 800 acres of forest that once surrounded the town.  Embedding a town in a green swath of forest was one of Franklin Roosevelt’s fundamental principles in designing Green Towns. As time passed, the 800 acres that defined the town was sold and developed piece by piece until only 225 acres remained undeveloped.  This remaining land was often referred to as Parcels 1 and 2 but affectionately referred to by many citizens as The Great North Woods.

Since the early 1960’s, various proposals for development of Parcels 1 and 2 were suggested. At one point, a portion of Parcel 1 and much of Parcel 2 ( a total of 72 acres) was acquired by Prince George’s County as a potential site for a new school complex.   Eventually, in response to citizen’s interventions, one school, now Eleanor Roosevelt High School, was located on the other side of the Baltimore-Washington Parkway. The 72 acres continued to be owned by Prince George’s County.

In November 1987, the Greenbelt News Review ran a story with the headline, “ Townhouses, Detached Homes Proposed for Undeveloped Parcel 1 in North End”.

As you can imagine, many of the town’s people were very sad. This proposal alone would have devoured nearly half (100+ acres) of what was left of the remaining Green Belt.

Even worse, plans were soon underway to develop much of the remaining forest land (the 72 acres owned by the county), into a sprawling county –owned sports complex with up to eight lighted ball fields, a 300-car parking lot and a snack bar.

As you can imagine, the townspeople were really very sad.

Within weeks of the News Review article, Ruth Kastner and Paul Downs formed a citizens’ group, the Committee to Save the Green Belt. They went to the city council but were informed that the 100 acres no longer belonged to the city – it had been sold as the rest of the green belt had been. This included Parcel 2.

The Committee jumped in and worked feverishly to save the woods, offering woods walks, bird walks, Halloween Tours, Labor Day booths, and countless other ways to introduce the beautiful forest to those who did not yet understand its priceless legacy. These efforts continued for many years.

Through the dedicated efforts of Bill Rich, Yoni Siegel and others, the Committee helped elect Rodney Roberts to city council. Through the years, with Rodney Roberts on council and the Committee’s relentless public awareness campaigns, the group became a force to be reckoned with – they simply would not go away. The Committee grew, consistently supported by the citizens of Greenbelt.

Hundreds of residents supported the Committee when it urged council to use condemnation laws (squatter’s rights) to buy back the land. And so, in 1990, the people of Greenbelt recovered the land that was the city’s remaining historic legacy of the Green Belt.

At last, all of the land – the last of the Green Belt – belonged to the town.

So Greenbelters were happy – for a while.

Yet again and again, the Committee and stalwart citizens came out on freezing winter nights to fill council chambers and demand that the woods be saved from these new ideas. Often there was standing room only in the council chambers.

The Committee battled these threats year-round for more than a decade, through the 1990s and beyond. Every threat to destroy the forest further galvanized the citizens.

Finally, in 2003, after nearly a half century of citizen interventions* to save the woods, the Greenbelt City Council (Rodney Roberts, Mayor J Davis, Alan Turnbull, Tom White and Ed Putens) voted 5-0 to create a 225-acre Forest Preserve to protect the woods for generations to come.

So this year, we honor the tireless efforts of the members of the Committee to Save the Green Belt. In honoring them, we celebrate our entire Greenbelt community – citizens, council members, young and old – who were so noble as to care for its forested lands.   And we thank those who gave so much for this forest – for this home of so many homes – over so many years.

If the Committee and the citizens of Greenbelt had not been there, virtually all of the Green Belt would have disappeared forever, melding into an all too familiar landscape that carries the need for more and more houses, more highways and more shopping malls a little too far. Instead, we have a priceless legacy: an historic urban forest saved by citizens, for the pleasure and well-being of the wildlife, our children and all of Greenbelt, for generations to come.

“Be With the Woods, but Most Important, Let the Woods Be.”

* The effort to save these woods includes the challenges met successfully in the 1960’s when the 72 acres procured by the county was planned as the sight for the Eleanor Roosevelt High School, which now resides on the other side of the Baltimore-Washington Parkway with access provided by the walking bridge.

Show your support for the woods with a handmade Keep it Wild and Wooded Bracelet or an original art celebration t-shirt. Visit our Support Us page for more details.