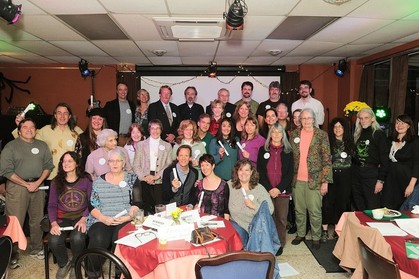 Thank you to all who were a part of this amazing evening!

At this very special event,  we honored and recognized all of those who played a part in the creation of the Greenbelt Forest Preserve on the 10 year anniversary of the date of the unanimous vote by the Greenbelt City Council of 2003 to pass the forest preserve ordinance. Guests enjoyed a delicious vegan buffet and special cake prepared by Chefs Karim and Maria, with music by the Homestead Act: John Bolten, Allison-Smith  Bolten, Amy Sullivan.

Mayor J Davis offered a Proclamation on behalf of the City of Greenbelt acknowledging the work of the Committee to Save the Green Belt, and their supporters, in saving the woods from development.

Susan Barns then presented Forest Advocate Awards from the Old Growth Forest Network to the core 4 members of the Committee to Save the Greenbelt: Paul Downs, Rodney Roberts, Bill Rich and Yoni Siegal.

Prince George's County Department of the Environment Director Adam Ortiz was also on hand to present a citation on behalf of the County Executive congratulation the citizens of Greenbelt.

All who played a part in the creation of the Greenbelt Forest Preserve were then presented with special scrolls from the Celebration Planning Committee: Susan Banett, Jean Newcomb, Kristin Fletcher and Allison Smith-Bolten.

Paul Downs, president of the Committee to Save the Green Belt, read a stirring original work to end the program, The Arc of A Wood's History, offering a personal retrospective on the efforts to save the woods.

Special thanks to our generous event sponsor, Maryland Milestones/ATHA!

Show your support for the woods with a handmade Keep it Wild and Wooded Bracelet or an original art celebration t-shirt. Visit our Support Us page for more details.